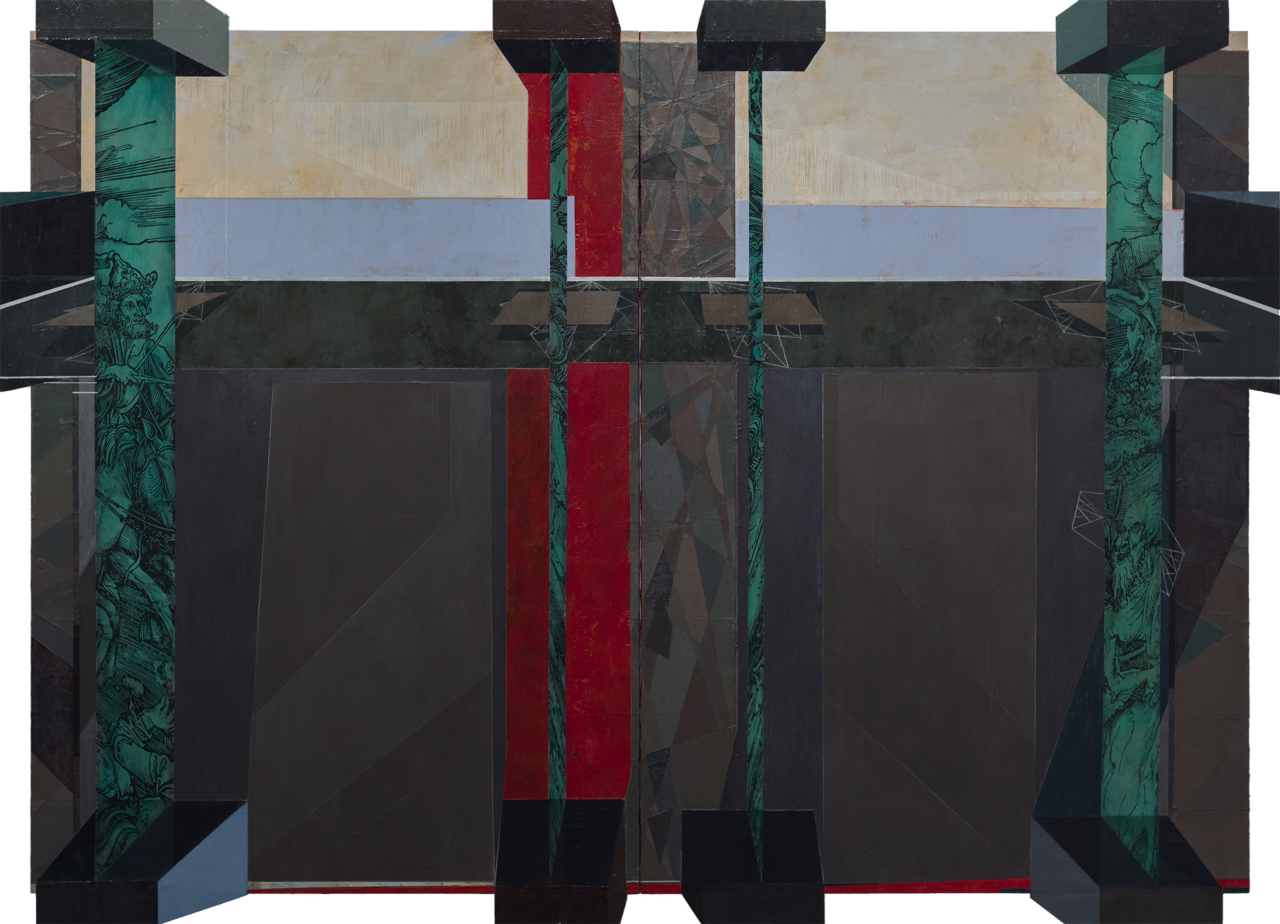 acrylics and graphite on plywood and canvas

Flattening of the Horizon

The image of the horizon reappears in today's experience of space and time, either in the form of an existing spatial limitation or in the form of an expected singularity. However, its linearity as a final boundary to which the gaze reaches (and imagining that which is beyond it), which has characterized the classic perspective painting and the traditional humanistic experience, becomes insufficient. The points of view and vanishing points multiply. The horizon flattens, transitions to a plain which seeps into our space. It is only possible to move across the plain and jump between individual plains. It is the joint of timelines where the future has already surpassed us and the previous past has once again regaint its potentiality (of being or not being). In this sense, all anticipations of singularity are constantly joining this type of form of the absolute horizon.


The singilarity is already here. Catastrophe is not something that is yet to happen but is already part of the present which we can only seize as past. Time as such is catastrophic. The presnt is severed with time cuts from various historic (and future) eras: future time (expectant apocalypses) as not yet realized, unpredicted by the past, has already passed, it is already a part of history. What remains is only its anticipation, its potential transgression of an existing situation. The past image enters into a future-orientated view. A catastrophe happens absolutely.


The perspectival painting enables an impossible view: viewing the object from the side while the direction of looking stays parpendicular to the plain of the visual field at all times. This insurmountability of this perpendicularity assumes a motionless vanishing point which is not necesserily identical to the eye. Linear percpective anticipates the eye's obsolescence. The point replaces the eye. The mathematization of the procedure of constructing a perspectival painting closes the dynamic space in the last instance which surpasses the law of optics: the presented objects are no longer identified one-sidedly, from one vanishing point, but are characterized by a certain limitlessness of possible relations. The middle (vanishing) point is replased by the multiplicity of points which surround the visual plain: the vanishing lines of all vanishing points form a composition of convergent-divergent zones which expropriate the privileged position of the viewer. From the vantage point of outside of the painting they outline the shape of a flattened horizon, a horizon as a plain of limitless possibilities of always different perspectives. In the painting you are always at the beggining and always at the end.